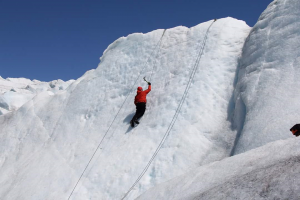 Where do you live now:

I currently live in Indianapolis, IN and Port St. John, FL

What have you been up to since STA?   Since graduating STA I have pursued a career in entertainment. Throughout High School I participated in technical theatre at both Cathedral and Indianapolis Civic Theatre.

After I graduated from Cathedral, I attended IU where I went on to receive a degree in Theatre Design/Technology. Shortly after graduating IU I moved out to White River Junction, VT, a small town, near Dartmouth College.

While living there I worked for Northern Stage Theatre as a carpenter for one season. Once I finished my season there I took my skills just outside of Chicago to Hall Associates Flying Effects. There I performed tasks inside and outside the shop pertaining to Performer Flying. In short I helped create the illusion of someone flying through the air. While working at Hall I received a call from Disney Cruise Lines asking if I wanted to come and work for them. I immediately jumped at the opportunity to work for one of the largest companies in the world. It was an eye opening experience that I will never forget. Once I arrived on ship I was put straight to work. When being hired they tell you that you will not have any days off, but you do not completely believe them until you live it. On top of not having days off they expected you to work 70 hours a weeks. In the big scheme of things it was not that bad considering you were stuck on a ship AND I was able to get off the ship while in port, so I did get to see the world. I also was able to me some incredible people from around the world.

After 8 months I realized that ship life was not for me, and I decided to stay land based. After leaving ship life I decided to create Gula Productions LLC where I would become my own boss. It gave me the opportunity to do things on my time and not be tied down to one company. Now since 2013 I have been a contractor for IES, Innovative Entertainment Services, traveling all over the world. I met IES while they were training me for stunts on Disney Cruise Lines. As luck would have it I would return to the ships with IES. This time I would not be living on the ship, but rather meeting the ship in port for the day. At times I would have to sail with the ship but as a guest not a crew member. Working as a contractor for them has given me the opportunity to still work on other projects, travel the world, and see my family. When I am not in Florida doing work for IES I am normal in Indianapolis working in the shop for Booth Tarkington Civic Theatre, Flying by Troy, building custom aerial equipment, visiting and helping the ladies out at Cirque Indy, and seeing my extended family. Cirque Indy was one of the first places to hire for rigging and equipment building. I was able to build and install many of their apparatuses for their studio. It is one studio that I would recommend everyone checkout.   Most recently I was part of Mothmen Dance who appeared on America’s Got Talent in 2014. I was able to perform at the both the Kodak Theatre in LA and Radio City Music Hall in NYC for AGT.

What is your favorite STA memory?  My favorite and most beneficial memory for STA was the time that I spent in the Recourse Program. Patrice Payne was had a huge influence on my life. She was able to help me with my dyslexia and push me to better myself academically. I will never forget all the work she has done for me and countless other students. I will remember my time in her class room more than any other class or sports teams. Without the Resource Program at STA is would not be where I am today!

What do you like to do in your spare time?

In my spare time I like to explore new cities and see family and friends. When I have time I enjoy going to see shows, playing games, rock climbing, and learning more about rigging to further my career.

What words of advice would you offer a current STA student? Never give up on your dreams, and do not let people tell you that you cannot reach them. Continue to passion whatever passion that you have, and work hard to reach your goals. No matter how smart we think we are we have to continue to learn new things to further better ourselves. Hard work does payoff in the end.

PS from the St. Thomas archives:

Gabe also left an impact on STA.  He received several awards while a student and was a role model to others.  Just a small sample of his awards: