Near the end of April, my class and I went on our annual 8th grade trip to Washington D.C. and Gettysburg. We had an amazing time and grew closer together while still learning about the history of our nation’s capital.

We took a bus to get to D.C. It was very nice and included WiFi and a bathroom. While on the bus, we were energetic and sang hilarious songs. The next day, we were all excited for our first day in the city. We went to the White House, the Capitol, the National Archives, and saw a play at the Kennedy Center titled “Shear Madness.” It was a play about a murder at a barber shop, and it was definitely directed toward our age group. By the time we got to the hotel, we were all exhausted after our busy day.

The next day was even more jam packed. We started off at Arlington Cemetery where we saw two important ceremonies: the Changing of the Guard and a Wreath Laying Ceremony. Both were beautiful and meaningful and we were honored to be able to be there.  After Arlington, we went to the National Cathedral, and then to our selected museums. I went to the Newseum, and although I did not have much time to look around, I learned a lot. We ate dinner at the Hard Rock Cafe and finished our day with an amazing tour of the monument. We saw the Lincoln Memorial, Martin Luther King Memorial, WW11 Memorial, and many more. The monuments are quite awesome.

Finally, on our last day of the trip, we went to Gettysburg. We visited the museum and got a tour of the different battle sites. We had a amazing tour guide who shared so much interesting information about the history of the battle and made it one of the favorite spots for me. We left late that afternoon and had another fun bus ride. We arrived back at St. Thomas at 2:30 am.

The Washington D.C. Trip has definitely been the highlight of my eighth grade year. It was an adventure that allowed all of us to be independent. It was not very restricted, but still safe and organized. It allowed for friends to strengthen relationships and make new friendships. Our previous class retreats have done this as well, but not nearly to the same degree. I wish that the trip could have lasted longer, and I would go on it again if I could. 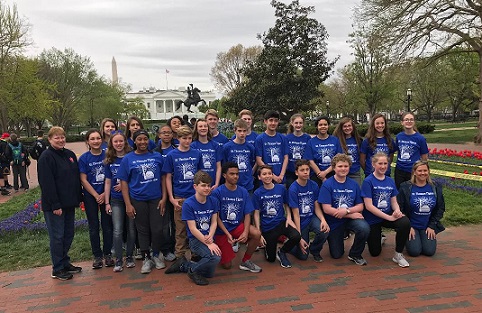