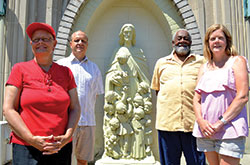 Patrice Payne, left, Tim Nation, Joseph Smith and Eileen Walthill are some of the members of the Race and Culture Committee at St. Thomas Aquinas Parish in Indianapolis that has strived to increase diversity in the parish and improve race relations in the community. (Photo by John Shaughnessy)

On the road to change regarding race relations in America, Patrice Payne offers one part of the road map needed to get there.

It’s the story of how two families from different cultures and backgrounds came together through their efforts to understand and appreciate their common humanity.

“Twenty years ago, we moved into a neighborhood that was a mixture of various races, cultures and religions,” says Payne, a member of St. Thomas Aquinas Parish in Indianapolis who is African-American.

“Our family was very fortunate to have a family from India move in as our next-door neighbors. I had never had any previous experience with anyone from that culture. As the years progressed, we socialized often and shared meals and music and customs. Our children played together, and we went camping together. We met each other’s extended families.”

(Related story: Can change lead us from fear to fairness, friendship?)

The mother of four added, “Our family approached our relationship with our neighbors with open hearts and minds. We loved learning about each other’s culture. When I learned about Sikhism and found out that some of their tenets were, ‘belief in one God, and the way to become closer to God is to be of service to each other,’ I was fascinated by the similarities.

“Even though we are no longer neighbors, we still get together several times a year.”

The closeness and beauty of that relationship has guided Payne as she has helped to lead the Race and Culture Committee at St. Thomas, an effort that started in late 2018 when parish leaders thought their church-and-school community was no longer as diverse and as active in working to improve race relations as it was in the 1970s and ‘80s.

“It was felt that parishioners and families needed to become more informed and more active in the area of race relations,” Payne says. “It was hoped that parishioners would then go out and make a difference in their communities.”

More than 1 1/2 years later, the committee has created a road map that offers directions for how Catholics and their parishes can work to improve race relations in their community and the country. At a time of riots, peaceful protests, despair, hope, senseless deaths and calls for the need to listen and live together, Payne shares some of the parts of that road map.

“Work to integrate neighborhoods,” she says. “Educate yourself about the daily struggles of African-Americans. Find ways to make a more just and equitable society. Keep an open mind and heart, and have a desire to change, learn and grow.” (Related: Recommendations offered for improving race relations)

She includes another direction that’s especially personal to her.

“Develop meaningful relationships. Doing so can help lives become fuller and more complete—just like ours did because of our neighbors from India.”

Eileen Walthill is one of the 10 women and the 10 whites who are part of the 17-member committee at St. Thomas.

Jose Samperio is the only Latino on the committee, which also includes six members who are black.

Walthill and Samperio have been part of the committee’s efforts to provide parishioners with opportunities to listen, learn and share—including being part of dinners with people from different races and ethnic backgrounds, having discussions of books and movies on the issue of race in America, and inviting speakers to the parish to provide training on improving race relations.

Samperio and Walthill say they have grown from such experiences, including growing in humility at times.

“I have learned that there are wonderful humans of all different backgrounds, cultures and social status that have an amazing spirit to help,” Samperio notes. “I have also learned that it is incredibly difficult to decide what actions one should take to channel this helping spirit.

“Mostly, I have learned that effective change is within me—and the actions that I take every day—to make a difference. This country needs Martins [Luther King], Rosas [Parks] and Susans [B. Anthony]. But it also needs everyday people effecting a change within their community.”

Walthill believes that people who are white have to make a commitment to create and support changes that will lead to equality in jobs, education and healthcare for people who are black.

“One of the things I have learned about race in our country is the lack of interest, support and will of white people to actually walk alongside black people and do the work needed to change the systemic racism in this country,” she says.

“We—whites—must be willing to educate ourselves on the inequality in our country, to accept that we created the issues in our country and then fight for change.”

Both Walthill and Samperio believe their Catholic faith has an important part in helping work toward the committee’s goal, “That They All May Be One.”

“I am a white female who often does not have patience for my faith to catch up with my actions,” Walthill says. “Yet, I realize if I don’t have my faith front and center in my life then I react to situations in a very frustrated and angry way. Which usually gets a very negative result.”

Samperio says, “We need to continue to have faith in the better angels of our nature. I fundamentally believe in the good spirit of human beings. We need to channel the love for positive action and accept that we can be wrong.”

A deep pain, a deeper faith

At 78, Joseph Smith is one of the six black people on the St. Thomas committee. He has seen more of life than the others, more of the struggles and inequalities that black people face in America.

He has also felt the devastating pain that comes when people who share the same Catholic faith don’t live that faith toward others. It’s a feeling he learned early, as a child.

“I have had to bend and twist and turn every day of my life to exist in this world,” Smith says. “I have learned that from the first day I entered Holy Angels School as one of the first African-Americans to walk into that previously all-white Catholic school in 1949.

“I looked for Christ, and I did not see him when we sang songs such as ‘Ole Black Joe,’ and the class turned to me and laughed at me. But being in America, I had to accept that humiliation.

“That was my pain of being a student in a Catholic school in America in the ‘40s. The integration of my church/school did not remove racism in the ‘40s. And not a lot has advanced toward removing that deep, settled effect of racism.”

While that pain is settled deep in him, he has also stayed deeply committed to his Catholic faith through the years. His passion to work for change hasn’t wavered either.

“This parish really wishes to overcome the obstacles of racism—and tackle the root causes,” he says. “We realize that there is a need for reconciliation, and we can begin to reach out to listen and lead. Our faith is strong, and we truly seek methods and approaches to educate our fellow parishioners with passion, with material such as books, films and workshops. And honest dialogue.”

That honesty sears through in his effort to help white people understand what black people have to endure.

“We were born in a nation which identifies humans by the pigments of their skin. And this is so ingrained in all of us that we do not know it.

“No white brother of mine can truly comprehend what it feels like to be wrapped in my skin. Why, you may ask? Because you, my brother, do not have to. It is something I have lived with for nearly 80 years now.”

Smith believes that all Catholics, all people have a part and a responsibility to end racism.

“There must be an ability to open up our own heart and head to the facts of racism,” he says. “Admit that there is racism, and combat it together.”

Working to change hearts and minds

“I have learned that it takes everyone working together on the issue of race,” she says. “Each person has wisdom and knowledge to share. If we don’t listen with intentionality and compassion, plans and activities won’t be as successful. You need as many voices as possible that represent all entities of the population.”

On an individual level, she says that working toward ending racism involves “a lifetime of learning, reading, listening and doing.”

That approach continues to be imperative in the wake of recent events, she says.

“As events within the last weeks have unfolded, many of our hopes have been doused,” Payne says. “But hope springs eternal. After a period of time for grieving, members started to develop plans to lead our parish into next steps.”

A virtual prayer service was set up in early June for the parish to “pray for and lament” the loss of black lives at the hands of police officers. She says future plans include a proposed meeting “for police and civilians to calmly discuss ways to make changes, followed by prayer.”

It’s all guided by a commitment to keep their Catholic faith at the core of everything they do.

“Have faith that ‘God has this,’ and that the Holy Spirit is moving within people now to make a change of hearts and minds,” Payne says. “Pray without ceasing. Read the Bible, especially the Acts of the Apostles, and notice how the Holy Spirit touched the disciples to boldly proclaim the Word of God and live together in community.

“Finally, ask God to show you what actions to take, so that all may be one.” †