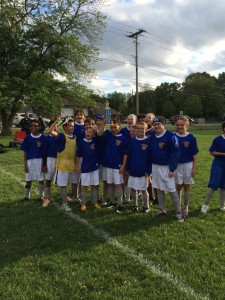 championship game where they battled Nativity. The match was tied at the end of regulation and two

periods of overtime, necessitating a shoot out. Five players were selected from each team to decide

their team’s fate. The first four shooters for each team scored and the game came down to the 5th and

blocked by goalie George Forsee. And so, for the first time since 1983, St. Thomas Aquinas won the City

Championship in soccer! Special thanks to coaches Joe and Emily Sochacki, all the supporting parents

and staff, and the 5th and 6th graders for a great and memorable season.