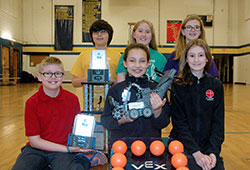 The six students from the small Catholic school on the north side of Indianapolis kept hoping and dreaming that all their efforts at the Indiana state tournament would earn them a place in the world championship.

And now that the final results were about to be announced—on a day of competition that began at 7:30 in the morning and now neared 5 p.m.—their nervousness began to overflow. READ MORE